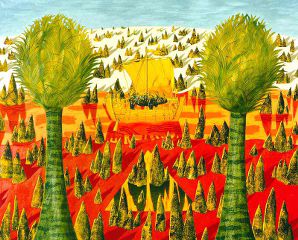 "Painting is colour" - fervent colourists are wont to say. However, in the history of art the role of colour has not always been understood or used separately and as the only value which makes a painting a masterpiece. What light does with colour - those glimmering reflections, coloured shadows, the interaction between neighbouring colours - has been achieved and experienced by ages of European painting. But colour can be experienced and used symbolically, as a medium of mental and psychic activity. Then, instead of the term "colour" we should rather use "unrelated colour". Sonorous, rich, rainbow colours have their own concise meaning originating from memory and intuition, and their cultic and magical influence seem to arise from some extreme, existential experience. For the phenomen of the variegation of the world begins when light permeates the dark matter suspended in the outer space of infinity.

Guillaume Apollinaire, a poet and true friend of painters, attempted the following definition: "Painting is essentially the voice of light. And when light is able to express its full richness, everything is infused with colour." Colour thus needs "richness", complementary saturation, and that very peculiar kind of primary, harmonic tone then becomes the source of derivative, resultant colours and from which sophisticated hues are perfected. These are what everyday reality is made up of, but the holiday of this reality is colourful, festive, choked to saturation, vivid, straightforward, grasping, spontaneous, aggressive, brimming over with joyful vitality - like Katarzyna Kopańska's paintings. Being in close contact with them for any length of time lays one open to their archetypal magic and emotions, coded in brave decorative effects. The artist's fervent trust in painting that is both pure in form and equivocal in universal meanings, sometimes makes her paintings seem like a manifestation of a ritual trance. This must surely have its origins in the very essence of the world, so to speak, and circles around this centre, vibrating with elemental life. The joyful holiday of existence can be luxuriant with passionate expression or celebrated with mystical solemnity.

Any deeper consideration of the creative work of every true painter should include the question of their attitude to nature and reality, and give an explanation of their own unique stylistic code of representation. Katarzyna Kopańska is an artist who creates a broad, extremely general, multi-coloured outlook on the world out of elements taken from reality or even from her immediate surroundings. It is not easy to reconstruct the iconology of her pictures, but the first impression is that these works, with their complex and panoramic representations, derive from the medieval painting convention, that of the first centuries of the second millennium. This line of interpretation indicates the contact with ancient Greek mythology, inherited by the cultures of Rome and Byzantine. And that is the source of our Polish borderland culture, an intersection of varying influences, the assimilation of currents springing from a number of different foreign cultures. 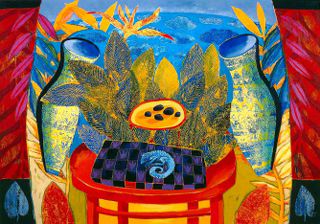 The inclination towards ornament and rhythm, the use of wide planes, raw colours and decorative effects draws the context of her aesthetic views close to the remains of exotic, non-European cultures and civilisations, phenomena derived, perhaps, from the Far East, Tibet, India, or the totemic elements of South American "sun" cultures even more exotic and alien to European categories. One could venture the opinion that in painting her stories about the worlds of human, animal and plant myths, Kopańska is painting something mystical. The transformation of natural shapes into strict geometrical forms, and the arrangement of separate topographical zones into systems of central, symmetrical and row compositions makes her paintings mandala-like. The Sanskrit term mandala means 'circle'. Mandala is a form of yantra, it is a ceremonial-geometrical diagram based upon concentric circles. Mandala is a method of concentration and contemplation, leading from material forms to spiritual spheres, and I think that in a way Kopańska's paintings have something in common with it. Their surreal air and atheistic mysticism, their exuberant cult of nature and coded symbols, while conducive to mental stability, perversely also give rise to a creative ecstasy that transforms everything that is ordinary and natural into a mythical story that delights in its exquisiteness.

The artist places her stylised shapes of seas, mountains, rivers, buildings, men, birds, animals, plants, objects into vast landscapes, even when the foreground motive is arranged like a classic still life. In "Still Life with Ibis" there is no wall, no tapestry, not even a window. Behind the red bird standing on a chess-board, next to a statuette and a plate of cherries extends a flat, yellow landscape with small pyramids, lakes and small step-shaped buildings. In the centre of the picture entitled "Niche", there is a tree in a flower-pot with a flock of red birds in its crown. Like the Edenic apple-tree of the knowledge of good and evil it sets in order the orange background composition composed of yellow river strips, horn-like hills and small trees. Everything here, like on a naive sketch map, is in a graphic convention and subordinate to the separated middle. (In fact, in all of her pictures the artist uses simplified forms and shapes reduced to calligraphic characters and ideograms.) The picture entitled "Post-Glacial Valley" is composed in the same manner and only the inverse colour tensions are different. The hell-red oval, containing two fish and a boat and placed in the middle of the picture, is surrounded by a cold landscape - blue leaves and cottages, green mountain hillocks and a white strip of sky on the horizon. In the picture "Atrium", the effect of the symmetrically arranged columns of blue trees is intensified by a tree in a flower-pot, also blue, standing deep inside, in the middle of the picture, behind a bowl-like vessel hiding a half-smiling blue mouth. The red shadows of a huge building magnify the feeling of the terrible heat. The air is orange and yellow ... "Still Life with Chameleon and Pitchers" is arranged theatrically. Between red curtains as if drawn aside and big pitchers suspended in the air, on a red table with a bunch of big leaves, a chess-board is placed; a tiny, blue chameleon is sleeping on the board and above it is an aureole-plate with unknown fruit. In the deep distance a view of a spacious ocean and a semicircular edge is just visible - a profile of planet Earth. 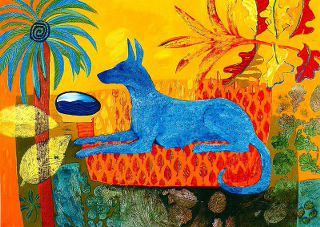 I suspect that in the context of landscape and plant paintings, compositions with animals are of particular importance to Katarzyna Kopańska. The blue bull would seem to be a cult calf, and the rhino and unicorn two seemingly related creatures, yet one is real and the other fantastic, with a whole host of symbolic meanings. The picture "Egyptian Bitch" represents a centrally placed female dog, a sign of domestic stability and faith but also a manifestation of a foreboding of death and a figure entrusted with the role of leader on the final journey. A cat eating a fish, a zebra stuffed with leaves, and many other similar pictures have been painted from instinct, from some wholly incomprehensible, irrational motives; in these pictures, in accordance with the Oneiric method of surprising associations, distant things and events are positioned close together. I include in this number the works "Dragon and Two Lakes", "Cat Drover", and the "Golden Ship" with a rhino on board. Yet it is not possible to give a full description of the detailed complexity of these pictures, for each one, in the middle distances or nearer, hides its own iconographic puzzles. I can see big heroes and tiny heroes, and elements, more or less important, uppermost or lost in a diversity of landscape. Only close inspection and contemplation of Katarzyna Kopańska's compositions, which are magic for me, can give a true experience of extraordinary states of colourful brightness. They can liven up, transform and renew the routine and habits of daily life, arouse emotions and develop the need for aesthetic sublimation. And if those paintings also tell us a story about the lot of a man who wanders through the garden of the world, so incredibly abounding in varieties of creatures, then their message transcends formal aspects alone and as such they are at least a sign of the fulfilment of matters instrumental to man's destiny. 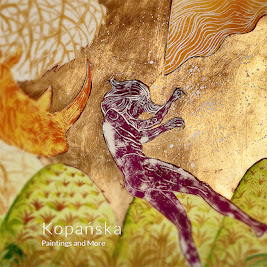 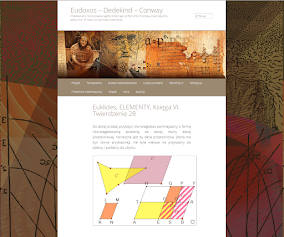